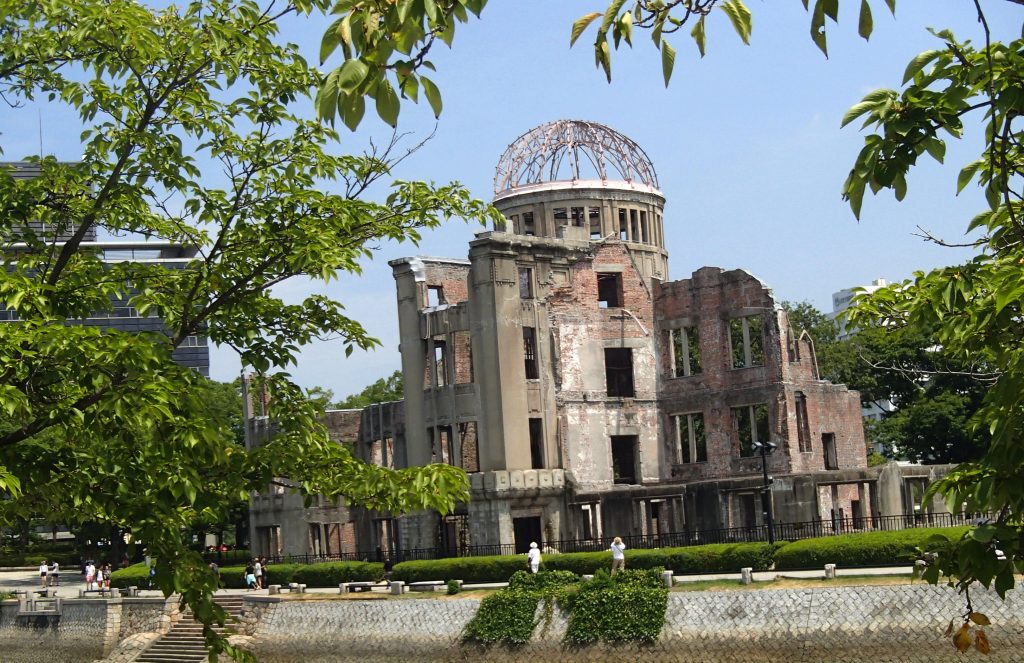 A life-sized replica of one of Hiroshima’s last-standing structures after the nuclear bomb drop in August 1945.

If there is any lesson to be learned from the current pandemic, we can look to both Hiroshima and Nagasaki, for their strength, resilience, and determination to move forward and rebuild their cities, economies, and reclaim their lives.

Covid-19 may have weakened our world trade commerce, economy, and morale, but it will not beat us. If the tiny nation of Japan can survive two atomic bomb blasts, then there is hope for all humanity.

August 2021 marks the 66th anniversary since World War II ended by two separate atomic bomb blasts to Hiroshima and Nagasaki on August 6 and 9, 1945, respectively, killing nearly 226,000 people on contact, with an additional 175,000 suffering acute radiation ailments, and eventually death, in the months that followed. 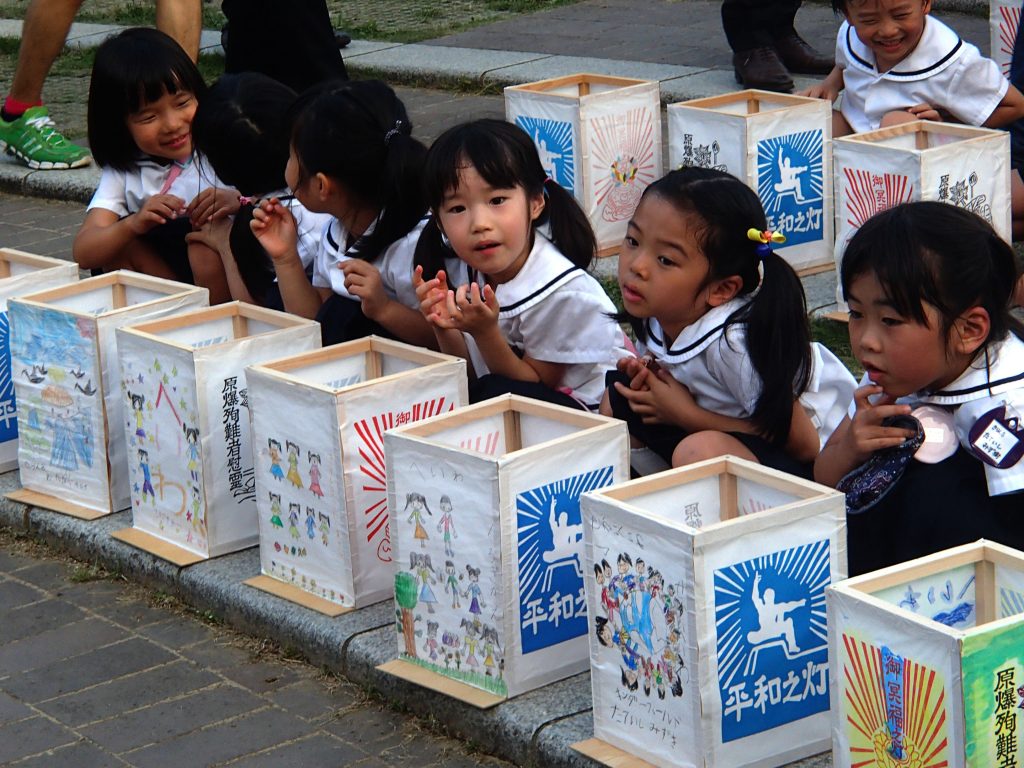 “This is the first point to be made, and the first action to be taken is to pull ourselves together. If we are all going to be destroyed by an atomic bomb, let that bomb when it comes find us doing sensible and human things – praying, working, teaching, reading, listening to music, bathing the children, playing tennis, chatting to our friends over a pint and a game of darts – not huddled together like frightened sheep and thinking about bombs. They may break our bodies (a microbe can do that) but they need not dominate our minds.” ~ CS Lewis

During the Edo Period between 1639 and 1859, all ports for foreign trade were closed. However, Nagasaki, nestled on the northwest coast of the island of Kyushu, amidst a large natural harbor, was the only Japanese port permitted by the Tokugawa shogunate (military government), making it the second oldest foreign trade port (after Hirado). 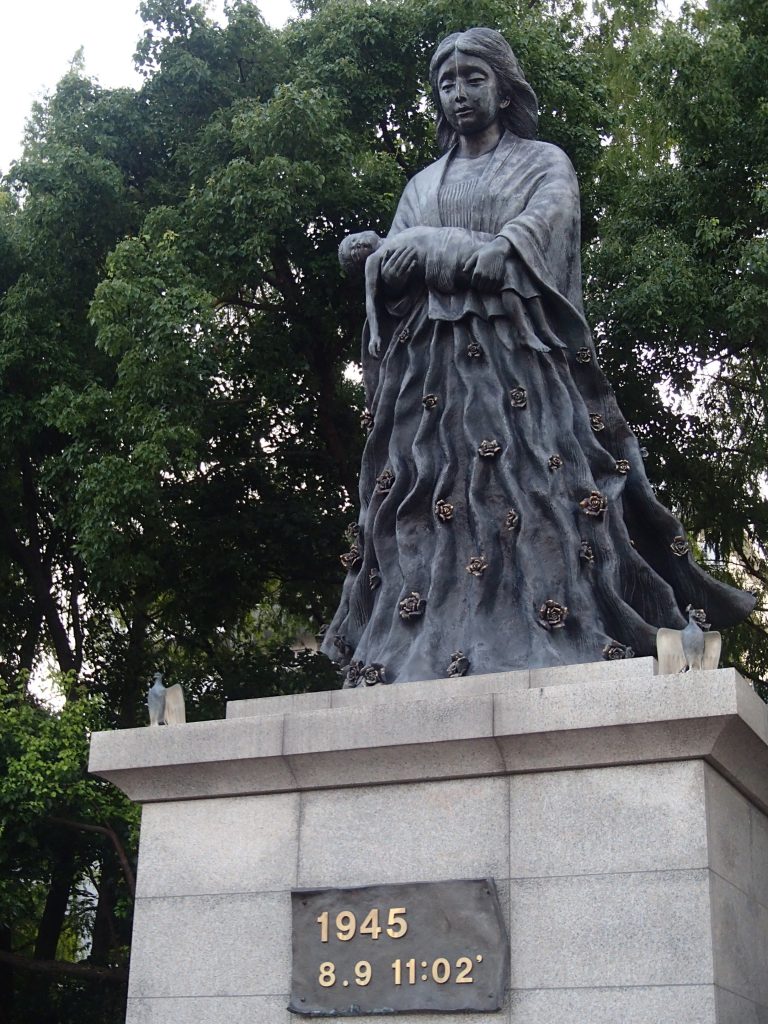 A statue at the Nagasaki Atomic Bomb Museum and Peace Park commemorating the children who died from the atomic bomb blast and effects of radiation.

Nagasaki’s large, natural harbor made it easy to earmark it as a major shipbuilding region in the early 20th century, also making it an easy target for the second atomic bomb that was dropped on Japan by the United States on August 9, 1945, ultimately ending World War II. The bomb devastated nearly 40 percent of the city’s buildings and innermost portion of Nagasaki, killing between 60,000 and 80,000 people: 40,000 on contact, with the rest dying within the next few months due to injuries, burns, or radiation exposure.

Since then, Nagasaki has been rebuilt and serves as a significant spiritual center for movements to ban nuclear weapons. The city industry is still based upon its large shipyards, grouped along the western and inner parts of the harbour, drawing thousands of tourists year-round to its numerous historic sites.

A few noteworthy sites include Mt. Inasa, the Nagasaki Atomic Bomb Museum and Peace Park, Glover Garden, and The Museum of History and Culture, which explores its foreign relationships at a time when the rest of Japan was isolated. 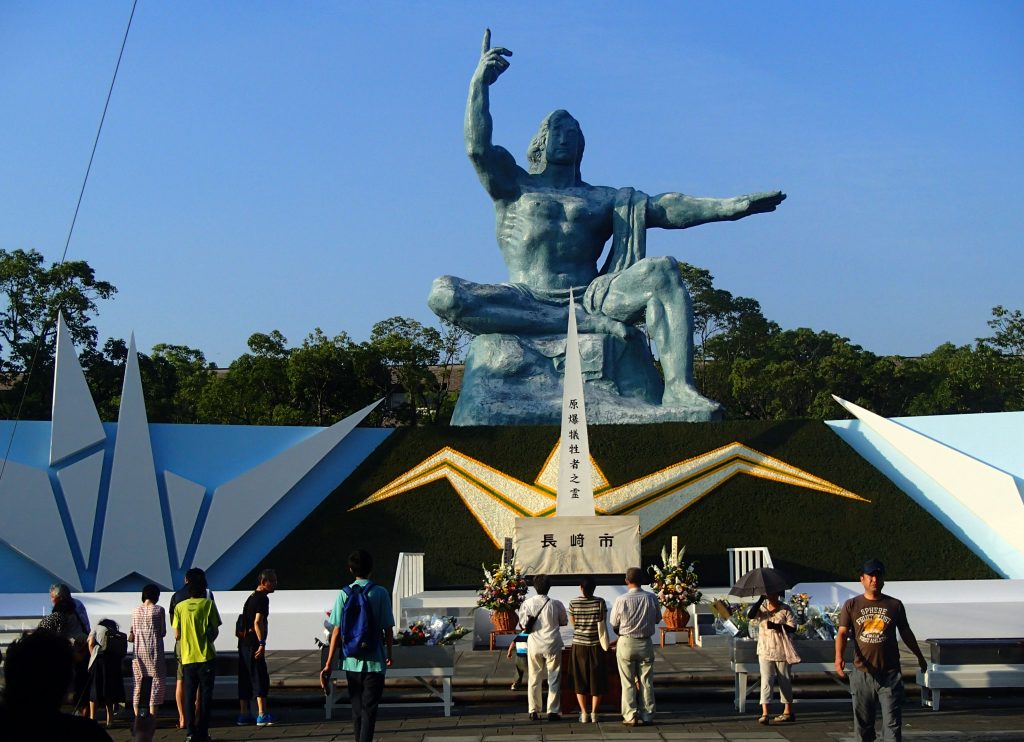 Nagasaki’s landmark, the Peace Statue, located at the Peace Park near the Atomic Bomb Museum.

The Peace Park itself was founded with the desire for world peace in mind. The park’s pride is the Peace Statue, with its right hand raised, pointing to the sky to symbolize the threat of nuclear weapons. The flat, outstretched left hand represents eternal peace, with its eyes closed in prayer and asking that the souls of the victims may find rest. Just over the bridge, you’ll find a small waterway riddled with beautiful murals created by middle school students expressing their interpretation of the bombing.  Some are carefree and vibrant; others more somber and reflective. Collectively, it is quite a remarkable site!

Just a few blocks away is Glover Garden, surrounded by beautiful greenery and flowers, consisting of nine historical western-style houses including the former residence of Thomas B. Glover, a large contributor to the modernization of Japan. 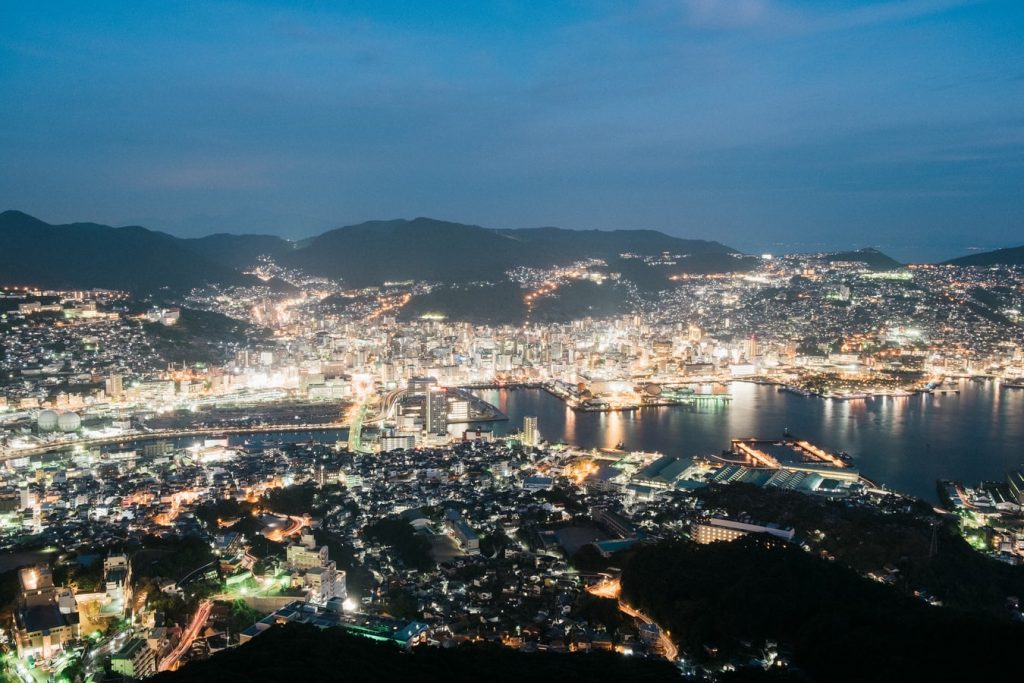 A panoramic view of Nagasaki’s natural harbor from Mt. Inasa at dusk.

And if you’re in search of sweeping, panoramic views of Nagasaki’s breathtaking harbor at dusk, look no further than Mt. Inasa. The 333-meter view from the top is said to be worth 10 million dollars with the way the light seemingly floats in the night sky due to the numerous houses that line the mountainside. In fact, in 2012, Nagasaki City was selected as one of the three best night views in the world.

Although that second bomb dropped on Nagasaki was significantly more powerful than the first bomb over Hiroshima, located five hours north, the terrain and smaller size of Nagasaki reduced the destruction of life and property.

Hiroshima is a dynamic city thriving with energy on a bustling economy. August 6 marks the 65-year anniversary of the U.S.-Japan alliance since the bombing of Hiroshima and Nagasaki.

At one time, Hiroshima was home to actors, craftsmen and music lovers during the Edo Period.  It was the principal castle town of the Chugoku-Shikoku region. After the Meji Restoration of 1867, Hiroshima became the seat of government for the Hiroshima Prefecture. Later, it was known for its strong reputation in education, and it took on a leading role in military commerce and industry. At that time, Hiroshima was a city of schools and shopping districts nestled on a green delta filled with towering trees. The mountains, the sea and two rivers embraced the region, making it an ideal place to live, work, and play.

However, the start of the second World War in 1941 would soon change the fate of Hiroshima forever. When the battle in the European Theater ended in 1945, the Pacific front continued. After much hesitation and deliberation, the Allied Forces had to put an end to the war once and for all by dropping the world’s first atomic bomb, impacting 350,000 lives. Thousands died, while those who did not experience the blast first-hand had to return home to rubble.

Turning a bad situation around for the worse, a raging typhoon hit the city a month later, submerging bomb shelters and shacks into water. Some survivors gave up living in the city to return to the countryside, many of whom died later from bomb-related radiation diseases.

Those who did not want to give up on living in Hiroshima persevered to the end. Hiroshima has since been reborn into a modern city full of life and culture. The first of the official reconstruction efforts began in 1946. Many schools, hospitals and businesses soon followed.

Public transportation in Hiroshima is quite robust. If you can think of the place, then you’re sure to get there by subway, train, or cable car. The subway and train system runs much like they do in most parts of the world. However, the cable system in Hiroshima is probably the most scenic way to see the city sights. The cable cars are set on tracks laid into the streets so that passengers travel alongside automobile traffic. It’s like riding on a one-track bus, but it’s roomier and a fun way to see the city.

Known landmarks standing strong today in Hiroshima include: Hiroshima Castle, Hiroshima Municipal Baseball Stadium, Peace Memorial Park, and the A-Bomb Dome, which serves as a grim reminder of that dreadful day 65 years ago.

Peace Memorial Park is home to the Hiroshima Peace Memorial Museum which showcases many exhibits of the city before, during and after the bomb. Among the most moving exhibits is a young boy’s tricycle rusted out, still intact.

Each year, Hiroshima residents hold a memorial peace ceremony by gathering at the Peace Memorial Museum at 8:15am – the exact time the bomb hit. Sirens sound all over the city and the Bell of Peace rings out in Peace Memorial Park. Visitors and local residents pause to observe a moment of silence. The names of bomb survivors who have died in the last year are added to the cenotaph. Activists and politicians alike use the occasion to call for pace, and the elimination of nuclear weapons. At night, 10,000 paper lanterns are set adrift to commemorate A-bomb victims. The lanterns are best viewed at the junction of Motoyama and Honkawa rivers.

In light of the current situation, perhaps it’s time to re-evaluate the types of things that can have similar devastating effects as an atomic bomb: biological warfare, greed for global power, hatred, unresolved resentment, and an unforgiving heart.  If we seek peace and resilience to reclaim our lives after persevering any situation, connecting with one another will help us move forward. We need to set aside our differences, and discover a common ground. Today, Japan and the United States are strong allies, despite the past. After all, Scripture states that love covers a multitude of sins. It’s never too late to rebuild, re-invent, and reclaim our lives.

Any cookies that may not be particularly necessary for the website to function and is used specifically to collect user personal data via analytics, ads, other embedded contents are termed as non-necessary cookies. It is mandatory to procure user consent prior to running these cookies on your website.